Two Delhi families, after months of suffering, found hope in each other when they helped save each other’s lives through swap transplant. Harminder Singh and Yogesh Sharma, both 45-year-old men, had been suffering from “end stage” liver disease for more than six months. Their wives wanted to become donors for their respective husbands but their blood groups were “mutually incompatible.”  While, Harminder Singh and Annu Sharma (wife of Mr Sharma) fell under blood group ‘B’, Yogesh Sharma and Gurdeep Kaur (wife of Mr. Singh) fell under the blood group ‘A’. This made them eligible for a swap transplant. “After a detailed medical evaluation, including psychological assessment of both the donors and recipients, the couples were found to be ideal candidates for paired exchanged live donor liver transplants,” the hospital said in a statement.
Swap transplant involves an exchange of organs between two families, who cannot donate the organ to their own family member because of blood group mismatch. This is in a sense ‘paired exchange’. In this method there is a mechanism for organ sharing between two unrelated donor-recipient pairs. 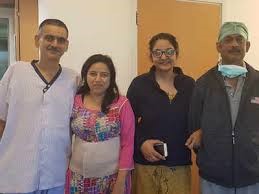 So the two women gave portions of their livers to each other’s husbands. The living donor’s liver fully regrows within four months and will ultimately regain full function. The donated portion does the same for the recipient.
There are mainly two types of liver transplant, one being a transplant from a living donor and the other being a liver transplant from a recently deceased donor. As the number of patients waiting for a donor liver surpasses the number of deceased donors due to the shortage of organ donors, living donors end up being the only option as waiting for a deceased organ to be available can damage the patient’s liver even more.
Both the transplant

s of Harminder Singh and Yogesh Sharma were performed simultaneously within a span of 12 hours at Max Hospital, Saket. They are now doing well.
Facebook Comments