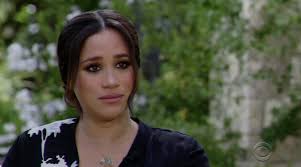 Recently in a bombshell interview with Oprah Winfrey, the Duchess of Sussex Meghan Markle revealed her mental health pressures she battled during her time as a Royal.

The Duchess of Sussex detailed the severe impact that the media and the Royal family had on her mental wellbeing, particularly while she was pregnant with her first child, Archie.

She said she asked for help both from within the Palace and permission to seek support outside of it, and was knocked back. Her husband, Prince Harry, said the same.

She didn’t disclose who this person was, or their title.

“I went to the institution. And I said that I needed to go somewhere to get help,” she said.

“I said, I never felt this way before and I need to go somewhere.

She said it was after that conversation that she went to human resources asking for assistance, with no luck.

“I remember this conversation like it was yesterday, because they said, ‘my heart goes out to you because I see how bad it is. But there’s nothing we can do to protect you because you’re not a paid employee of the institution’,” she said.

So why this exclusive interview of Meghan is leaving people to talk about mental health so much: Dr. Manisha Singhal, Clinical Psychologist & Psychotherapist, Apollo Hospital says, “The need of Psychological counseling is increasing day by day due to rapid increase in cases of mental illness. A mental illness is a physical illness of the brain that causes disturbances in thinking, behavior, energy or emotion that make it difficult to cope with the ordinary demands of life.”

Mental illnesses affect 19% of the adult population, 46% of teenagers, and 13% of children each year.

The two most common mental health conditions are:

Mood Disorders – Mood disorders, such as depression and bipolar depression, affect nearly 10% of adults each year and are characterized by difficulties in regulating one’s mood.

Although the general perception of mental illness has improved over the past decades, studies show that stigma against mental illness is still powerful, largely due to media stereotypes and lack of education, and that people tend to attach negative stigmas to mental health conditions at a far higher rate than to other diseases and disabilities, such as cancer, diabetes or heart disease.

Stigma affects not only the number seeking treatment, but also the number of resources available for proper treatment. Stigma and misinformation can feel like overwhelming obstacles for someone who is struggling with a mental health condition.

However, if you have any signs or symptoms of a mental illness, see your primary care provider or mental health professional. Most mental illnesses don’t improve on their own, and if untreated, a mental illness may get worse over time and cause serious problems.

If your loved one shows signs of mental illness, have an open and honest discussion with him or her about your concerns. You may not be able to force someone to get professional care, but you can offer encouragement and support.