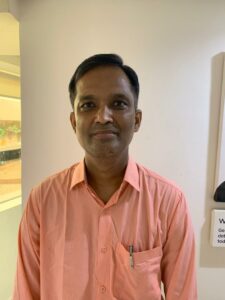 Mr. Tirupati Swami, an avid singer, resident of Ulhasnagar who works in Indian Oil Corporation, developed fever, coughs, and generalized weakness and was diagnosed as COVID 19 positive on 8th of August.

He was admitted to a nearby COVID center and remained stable till 17th of August, afterwards, he developed a sudden inability to speak along with mild weakness in his right hand.

His initial symptoms went unrecognized and as his condition worsened, he was shifted to Wockhardt Hospital, Mumbai Central on 19th August. His clinical evaluation revealed he was having language and speech dysfunction (aphasia) and the clinical suspicion was confirmed on MRI (brain) which showed a stroke involving the left half of the brain. After his initial stabilization, he was started on speech therapy.

Dr. Prashant Makhija, Consultant Neurologist, Wockhardt Hospital South Bombay said, “As he primarily had expressive aphasia with effortful and non-fluent speech, he was started on ‘Melodic intonation therapy’(MIT); MIT is an evidence-based therapy which utilizes elements of melody and rhythm to improve expressive language. As most of us are right-handed, our language function is controlled by the left hemisphere of the brain, and patients with stroke involving the left hemisphere often present with language dysfunction (aphasia).”

“Research has shown that musical skills are predominantly represented in the right hemisphere of the brain; MIT by utilizing elements of music with left hand tapping attempts to engage undamaged right hemisphere and entrains aphasic patients to speak in a new way“, he added.

Dr. Makhija continues, “It has been more than six months since WHO declared the novel Coronavirus as a pandemic. With time, our understanding of the disease has increased. What initially appeared to be an illness primarily restricted to lungs is now well known to be associated with neurological involvement, Stroke being one such dreaded complication. Time plays a crucial role in the management of Stroke patients but often inability to recognize the stroke symptoms early or inability to reach stroke-ready hospital results in inordinate delay and patients are left with neuro-deficits in the form of limb weakness or speech difficulties.”

Nutan Korganokar, Speech Therapist, Wockhardt Hospital, South Bombay said, “Although Mr. Swami suffered from significant Stroke related language dysfunction, his positive attitude and appropriate rehabilitation in the form of speech therapy helped him overcome this deficit. His love for music and singing probably contributed to his recovery and he is now on his path to normalcy.”

Mr. Swami said, “it was stressful for me and my family when I suffered from a stroke and was unable to speak. We are thankful to the team of doctors who guided us during this difficult period. We appreciate the utmost care taken by the Doctors and staff at the Hospital.”