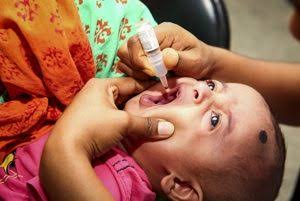 New Delhi: Clerics and scholars of different religious schools of thought in Pakistan have underlined that polio vaccination drops are Sharia-compliant and urged the public to make a success of the drive for the eradication of polio from the country.

Pakistan, which recorded 144 polio cases in 2019, launched a massive anti-polio drive on Monday to vaccinate 39.6 million children under the age of five in the country.

Pakistan has been fighting to combat polio since 1994

However, attempts to eradicate the crippling disease have been seriously hampered by deadly targeting of vaccination teams in recent years by militants, who oppose the drives, claiming that the polio drops cause infertility.

“Pakistan Ulema Council, Darul Afta Pakistan, Wafaq-ul-Masajid, Madaris-i-Pakistan and leading ulema and mashaikh have already termed polio drops not only halal but also beneficial for the humans and decrees have been issued that there is nothing harmful or haram in polio drops,” Pakistan Ulema Council chairman Tahir Ashrafi was quoted as saying by Dawn newspaper.

During a press conference on Wednesday, Ashrafi asked clerics and religious scholars to make the ongoing anti-polio drive a success and deliver this message in Friday sermons as well. He said polio had been eradicated from all countries of the world, except Afghanistan and Pakistan.

“We need to understand that senior clerics and religious scholars from across the Islamic world have issued decrees that there is nothing anti-Sharia in polio vaccine,” he said.

Commenting on the number of rising polio cases in Pakistan, he said these showed inability and failure of the health ministry.

He also requested the parents of children under five years of age to ensure that anti-polio drops are administered to their children.

Prime Minister Imran Khan had in December said that it was a “matter of shame” that Pakistan was among the countries where polio was still prevalent. Attacks on immunisation teams have claimed nearly 70 lives since December 2012.