New Delhi: At Kasturba Kushth Rogi Colony in Tahirpur’s locality of Dilshad Garden, the leprosy patients speak lead an unimaginably difficult life as they face complete apathy from the government.

Healthwire speaks to the patients to know more about their every day ordeal.

To begin with, many families haven’t received adequate assistance from the government. The patients can be seen peddling their specially-made tricycles by their hands but they tell that some families have multiple patients but they have only one got one tricycle. For instance, Bholanath Paswan and his wife are both leprosy patients but can be seen sitting together on one tricyle only with their back facing each other.

“We always have to do everything on our own. It is futile to expect any help from the government. Look at this thing, (he point his finger at the tricycle), even this we had to buy with our own money. How can we have another one. The only nominal help which is provided to us is the the dressing for our wounds.” When asked about the pension, he says, “What would a pension of Rs. 2500 do for us. It gets spent on everything before we know. Even when it comes to pension, while some have received it, many others are yet to receive it. There is one who would listen to us.” 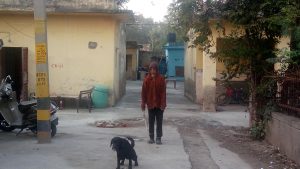 Some patients don’t even have tricycles to walk and still have to use crutches to move from one place to another.
Ramashish is one of them.

“I face a lot of difficulty in movement because I haven’t yet received my tricycle. The process of applying for a tricycle is so tedious as they (government officials) make you run so much for documentation work. How can I travel or walk up to them everyday. Their offices are far from here. I’m helpless,” says Ramashish.

Under the Union Health Ministry’s National Leprosy Eradication Programme, as on March 2018, 1,26,164 new cases were detected with maximum from Bihar. Even the Supreme Court had said last year that India “under-estimated” leprosy and diverted funds meant to eliminate the curable disease for 18 long years.

Among the medical help and facilities provided here to the patients, is a clinic for basic treatment run by a certain Samarpan Foundation Trust and a missionary run hospital care centre for women. The patients at Trust’s clinic are seen by Dr. DS Verma.

“I have worked in central government’s leprosy institute for 35 years and now I’m serving the leprosy patients here for the last three years. I work with Samarpan Foundation Trust here which has set up this clinic. The clinic is not run by government aid here but through contributions of philanthropists. There are 35 different colonies of leprosy patients spread over a large area in this part of the city. I see patients from all these colonies. Everyday, we provide atleast 150 patients with basic care like dressing of wounds by sterilized bandages and also treat them for other common diseases. Atleast 50-60 patients receive free medicines everyday here,” says Dr. Verma.

“We don’t get any help from the government. There is no policy meant exclusively for us. Apart from the medical help we receive at this clinic, no one even comes to ask our wellbeing,” said Savitri, who had come for treatment at the local clinic.

“There are no funds for any health procedures here. Our healthcare doesn’t matter to the government. There are a few trusts here (pointing out to Samarpan foundation’s clinic) which do our basic treatment, then there is a missionary run facility which takes care of women,” said another patient Acche Lal.

Healthwire also learnt that in case whatever little funds have been allocated for leprosy patients, they don’t reach the poor patients.

Speaking about same, Mohammad Ayub says, “We have not received any substantial help yet. If it wasn’t for a few doctors treating us, we would have left this place long ago. Such hopeless conditions we live in. We also know that funds in our name are being misused and usurped by some private hospitals. These funds are meant for our welfare but they we don’t get them. The only consolation for us is the recent hike in our pension from Rs. 1800 per month to 3000 per month.”

In the same vein, an elderly patient said, “Many NGOs seek funds in our name but don’t utilise it. Misuse of leprosy treatment funds has become a profitable business. There are fundraisers who invite people from government and intellectuals to collect huge sums of money meant for us but they keep it to themselves. I’ve seen and travelled to many hospitals only to find apathy for us. Even the government officials whose job is to look after us, remain unavailable when we need them.”

He later praised the Trust and said they doing work here.