On the occasion of International Yoga Day, Indo-Tibetan Border Police (ITBP) personnel also performed Yoga to be a part and celebrate this day.

In the video the ITBP personnel is seen performing the asana bare body braving the extreme cold.

See Video Here: An ITBP officer performs Surya Namaskar in sub-zero temperature, at an altitude of 18,000 ft in Ladakh.

#WATCH | An ITBP officer performs Surya Namaskar in sub-zero temperature, at an altitude of 18,000 ft in Ladakh.#InternationalDayOfYoga

Unlike the previous years, the personnel of ITBP performed Yoga on various high altitude border outposts in Ladakh ranging from 13,000 to 18,000 feet. On occasion, some ITBP personnel performed Yoga at 16,000 feet in Himachal Pradesh, 14,000 feet at the bank of Pangong Tso in Ladakh and at Animal Transport School in Arunachal Pradesh’s Lohitpur with horses and near Galwan valley in Ladakh on the Line of Actual Control (LAC) where as many as 20 Indian Army personnel had laid down their lives in the clashes with Chinese Army on June 15 last year.

Prime Minister Narendra Modi led the nation in celebrating the occasion of the 7th International Yoga Day whose theme this year is ‘Yoga For Wellness’. Addressing the nation, PM Modi said yoga remains a “ray of hope” as the world fights the coronavirus pandemic.

On the occasion, PM Modi also said the world is now going to get the power of M-Yoga application, which will have many videos of yoga training based on Common Yoga Protocol available in different languages of the world. 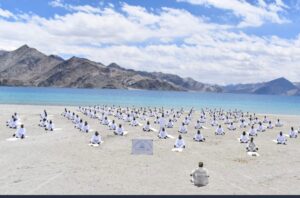 “At a time when the whole world is fighting the coronavirus pandemic, yoga remains a ray of hope. When the unseen coronavirus knocked on the doors of the world, no country was prepared for it in terms of resources, capability and mental state. We all have seen that in such difficult times, yoga has become a great source of inner strength,” PM Modi said.

“Relevance of Yoga has increased during Covid. Yoga has helped us to maintain our physical & mental health. We should make Yoga or other physical activities a part of our daily life. These will help us to increase our immunity against coronavirus,” says Union Health Minister Harsh Vardhan.