Many believe that leprosy is a thing of the past. Unfortunately, they have no idea of its continued prevalence, spread, and suffering it causes. The truth is, every year, over 2 lakh new leprosy cases are detected around the world which is more than 600 people each day, with over 50 of these being children.

YOU MAY LIKE TO READ: Awareness About Leprosy Is A Step In Curbing Stigma

India accounts for more than half of the leprosy cases globally(63% ). Due to lack of awareness and poor medical and support infrastructure, many infected with the disease are left unattended, living with the long-term effects and many more go undiagnosed. Due to lack of awareness of treatment and spread, leprosy patients are forced out of their homes, to go and live in a Leprosy Colony, with other people suffering from this disease. The extent of stigma and discrimination is evident by the fact that there are 750 leprosy colonies in India with over 2 lakh people are residing in them. The taboos and myths around the spread and perceived incurability of the disease exacerbate the situation making the plight of the leprosy patients deplorable. Ignorance around leprosy has been the biggest challenge in the systemic reduction of this disease.

Leprosy is curable, with zero transmission risk, if diagnosed in its early stages and supported with the right treatment. Due to fear and lack of knowledge that the disease is curable, there are still over 30 lakh people across the world living undiagnosed and every day the disease causes further damage to their living conditions.

If leprosy patients get the right treatment at the right time, they are cured for life and get rehabilitated in normal life. Leprosy is completely curable through a course of multi-drug therapy (MDT). The MDT is available free of charge and one dose itself ensures stopping of transmission. 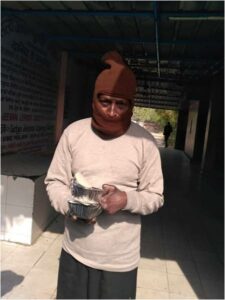 The Rotary Club of Delhi South has been helping in food distribution in Leprosy colonies in the last 9 months and has been at the forefront of creating awareness around Leprosy along with its partners LEPRA UK and ACRE.

Mr Deepak Kapur, Chairman of Rotary International’s India National PolioPlus Committee, states, “The burden of social stigma rests heavily on those diagnosed with Leprosy, especially so in the case of marginalized groups coming from less privileged backgrounds with less access to health care. Awareness about the disease and treatment is critical in bringing about a positive change in the attitude of the patients and of people in the communities in which they live.” Mr Pradeep Bahri, Chairperson, District Leprosy Control initiative also has some thoughts to share, “India has the dubious distinction of being the Leprosy capital of the world, accounting for 63% of the global cases. Due to fear (of the disease and the attendant stigma) as well as lack of knowledge, millions of people across the world remain undiagnosed, causing even more damage to their health, livelihood, and future. As a result of late detection, the chances of controlling the spread of the infection become much lower. One way of curbing the spread is to trace all patients, treat them with dignity and empathy and provide them access to preventive treatment. A broad spectrum of support is required to tackle the spread of misinformation around the disease, in order to end the inordinately high and needless stigma associated with Leprosy. With the support of our partners like Lepra UK and ACRE, Rotary Club of Delhi South (RCDS) through its Delhi South Rotary Service Foundation, is trying to make a difference to the lives of those in need of proper care and treatment.”

ACRE shares its views “Assets Care & Reconstruction Enterprise Ltd. (ACRE) strives to be a socially responsible company and strongly believes in giving back to the community. It is the Company’s intent to make a positive difference to the society in the areas of education, healthcare and skill development. As a corporate citizen, it is our co-extensive responsibility to contribute to society, in terms of helping the destitute by providing them with food, education, healthcare and vocational skills. ACRE is proud to be associated with Delhi South Rotary Service Foundation (DSRSF) for the Leprosy Project, not just with the aim of helping the leprosy patients, but also to help eradicate the social stigma attached with it.”