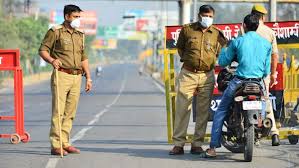 Millions of people across the country stayed indoors, streets wore a deserted look and bare number of vehicles were on the road on Sunday in an unprecedented shutdown on Prime Minister Narendra Modi’s appeal for a ‘Janata curfew’ to help check the spread of coronavirus. As the 14-hour ‘Janata curfew’ got underway at 7 am, people kept themselves indoors as part of the social distancing exercise to help stop the spread of the virus. All markets and establishments except those dealing in essential goods and services are closed for the day. The ‘Janata curfew’ will end at 9 pm.

Delhi woke up to empty streets on Sunday with people confining themselves to homes and vehicles off the road in view of the 14-hour ‘Janata Curfew’ initiated to check the spread of coronavirus. Barring shops selling essential commodities and pharmacies, all other establishments remained closed as the self-imposed curfew began at 7 am. Most of the people in the city skipped their morning walks while religious places curtailed activities as part of social distancing.   Services of the Delhi Metro Rail Corporation were suspended on Sunday in view of the ‘Janata curfew’ while half of the Delhi Transport Corporation (DTC) buses were off the roads.

Kerala is under a complete lock-down and roads in the state capital and other parts wore a deserted look on Sunday as the ‘Janata curfew’ proposed by Prime Minister Narendra Modi to check the spread of coronavirus, was observed by the people. The self-imposed curfew, called by the Prime Minister was welcomed by the Left government in the state. Barring a few vehicles, roads in major cities including Thiruvananthapuram and Ernakulam were empty. State-run transport buses were off the roads while Kochi Metro Rail also stopped its service along with private buses and the auto-rickshaws. State Health Minister K K Shailaja said people must stay at home and avoid crowds while following the directions of the government to prevent the spread of coronavirus. “It’s important that people follow the directions of the health department. Strong action will be taken against those who fail to follow the instructions of the state government,” Shailaja told reporters.

Novel coronavirus cases in India rose to 324 on Sunday after fresh cases were reported from various parts of the country, the Union Health Ministry said. The total includes 41 foreign nationals and four deaths reported from Delhi, Karnataka, Punjab and Maharashtra so far. “The total number of active COVID-19 cases across India stands at 296 so far,” the ministry said, adding that 24 others have been cured/discharged/migrated while four have died. Maharashtra has reported the highest number of COVID-19 cases at 63, including three foreigners, followed by Kerala at 52 including seven foreign nationals. Delhi has reported 27 positive cases, which include one foreigner, while Uttar Pradesh has recorded 25 cases, including one foreigner.