Climate change driven by anthropogenic activities may challenge the gains in public health over the past many years, particularly in a country like India that ranks high in the list of climate-vulnerable countries in the world. Globally, it is estimated that children are to bear most of the burden of disease due to climate change, with the poorest disproportionately affected. The higher risk associated with children is due to the combination of physiological vulnerability as well as the risk of exposure.

A study was undertaken for the first time over the central Indo-Gangetic Plain region DST-Mahamana Center of Excellence in Climate Change Research, BHU, explored the association between climate parameters and infectious diseases in a three-year follow-up prospective cohort of 461 children under 16-years-of-age in Varanasi city. The research led by R K Mall, including Nidhi Singh, T. Banerjee, and Akhilesh Gupta, have been recently published in a reputed international journal, ‘Science of the Total Environment’.

Findings from this study draw the attention of government and policymakers to prioritize effective measures for child health as the present association may increase disease burden in the future under climate-change scenarios in already malnourished pediatric population through multiple pathways.  The study further inspires and provides a background for more epidemiological studies to provide evidence for future burden of diseases associated with childhood malady.

However, climate change-related health impacts studies, particularly for children in India, is at an early stage. Any attempt to provide the epidemiological evidence association of pediatric health with climate parameters over the poorly investigated region of India will help the policymakers and the government to avert the risk that may arise due to climate change. 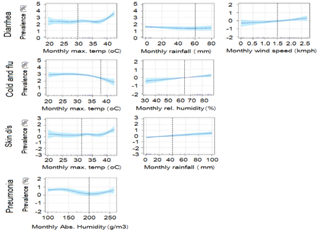 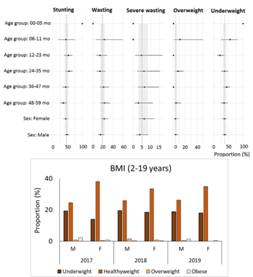 a. Exposure-response association and b. nutritional Deficiency in children in the study area for different age groups and gender