New Delhi: Yarraka Bayles from Brisbane posted a video of her nine-year-old son Quaden Bayles on Facebook. In the heartbreaking video, Quaden can be seen saying how he did nothing yet the bully called him the dumbest kid in class.

Comments of support and love poured in immediately after she posted the video on Facebook. Since being posted online the video has been viewed more than 4.6 million times. In the video she explained how this happens almost every day, and this not only hurts her son but also hurts them as a family.

Quaden Bayles was diagnosed with achondroplasia. Achondroplasia is the most common form of dwarfism.

In an interview with NITV, Quaden’s mother said she posted the video to raise awareness about the horrific affect bullying can have on disabled children.

“I have copped a lot of backlash for it, I thought twice about deleting it … but I wanted people to see the effect bullying is having on my child. If I don’t stand up and speak out for him, who will,” she said.

Yarraka told NITV that on the day in question she saw him being teased for his height.

“There’s no escaping it, this is our reality,” Yarraka is heard saying in the video. 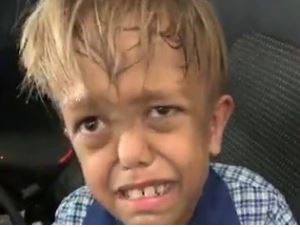 “It needs to be addressed straight away and that’s exactly what I’m doing now. Every time it happens, I’ll be doing a live video so that people know. So hopefully we can make some changes so that this doesn’t happen to another family and hopefully we don’t lose another young innocent life to bullying.”

She released a statement, saying “bullying has to stop” and thanking people from “all around the world” for their support after she posted the video, which has been viewed over 4 million times on her Facebook page.