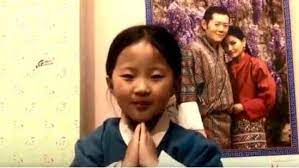 A video featuring a girl from Bhutan has recently grabbed attention of the netizens’ on social media for a sweet reason.

The clip starts with Syelden introducing herself and she then expresses her gratitude. The video concludes with her saying ‘Shukriya.’

“Khenrab! Your ‘thank you touches our hearts! #VaccineMaitri #indiabhutanfriensdhip,” reads the caption shared along with the clip.

India sent Covid-19 vaccines to Bhutan, along with other neighboring countries, under a grant assistance program dubbed “Vaccine Maitri”.

Take a look at the video:

The video has gathered about 10,000 views and tons of reactions from netizens which was shared on March 26. Netizens found Syelden’s message of gratitude extremely adorable. Many heart emojis and reactions were also shared to show their appreciation.

A country of about 800,000 people, Bhutan received 150,000 doses of the vaccine manufactured by the Serum Institute of India in January. But unlike neighboring Nepal that has suspended the campaign due to the lack of vaccines, authorities in Bhutan waited for 400,000 more shots that were provided this month to begin the campaign in one go.