Authorities worldwide are entirely focused on tackling the coronavirus spread and have issued guidelines for the management of other diseases. Amid the nationwide lockdown, however, some patients suffering from other diseases and health issues could not get specialized medical attention.

Seven children were brought to New Delhi on a special flight, with a medical team on board to tackle any emergencies.

“We used to get patients from the Philippines every month. Since the lockdown, sick children have been awaiting liver transplant. Twelve children had planned visits to Apollo’s New Delhi facility for a liver transplant. But due to lockdown, they could not travel to India and two of them lost their lives,” says Dr. Neerav Goyal, HPB Surgeon, (Liver Transplant), Indraprastha Apollo Hospital. “All of these children suffer from biliary atresia and so we wanted to get them to the hospital as soon as possible.”

Currently, these children and their parents have been quarantined at the hospital. A Covid-19 test was conducted and for all of them, the tests results came out negative.

“These children have to be quarantined in a separate facility,” says. Dr. Neerav Goyal, Indraprastha Apollo Hospital. “They cannot be quarantined at an institutional facility as they are in the high risk group and are susceptible to Covid 19. We have a clean hospital environment where their risk of infection is minimal. Also, as they need continuous medical attention, our doctors are constantly monitoring their health”.

Transporting these children to India was a daunting task in itself. There was no direct flight operating from Manila to New Delhi. Moreover, a medical team was required to travel with these sick children. But because of strict quarantine rules and regulations, no doctor was willing to take the risk.

Apollo Hospital identified ten doctors (interns) from the Philippines who were willing to come to India. They were provided training for ten days to handle some of the medical conditions ailing these children.

“Our child has waited for a long time for a liver transplant. We were due to visit Apollo hospital for his treatment in April”, says a child’s parent. “Due to lockdown, we could not visit. In the meantime, his condition deteriorated. We did not think that he would be able to make it. But God heard our prayers. ” 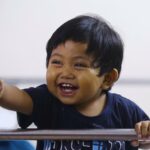 The children’s parents said that they were in constant touch with the staff from Apollo hospital. They were hoping that the Indian government would operate flights from Manila to Delhi.

In the end, constant efforts by the Apollo Hospital, government officials, FICCI Philippines, and Sonu Sood bore fruit. The children reached the hospital safely, where they are currently undergoing medical treatment.