40 years old Allahabad resident Mr. Akash Tambey was diagnosed with CKD secondary to Diabetic Kidney disease a decade back and underwent kidney transplant in 2011. His life was back to his normal busy schedule. He was advised regular check-ups by Dr Sanjeev Gulati, Director & HOD- Nephrology at Fortis Flt. Lt. Rajan Dhall Hospital in New Delhi to which he complied in a very disciplined way.

All was going well until at one of his follow-up examinations the ultrasound of the kidneys revealed a suspicious lesion in his right kidney. A CT scan confirmed worst fear of Dr Gultai and Mr Tambey was detected to have kidney cancer in right kidney.

Despite this, the good news was that doctors were able to pick the cancer in its initial stages as Mr Tambey was undergoing regular check-ups and follow-up after kidney transplant, something which majority of the kidney transplant patients often forget after a successful kidney transplant.

The diagnosis of kidney cancer turned his life upside down. It came as a shock for Mr Tambeya and his family as well. No one in his family had cancer before. When his diagnosis was first made in 2015, he went for treatment of nephrectomy (kidney removal) under Dr. Gulati.

Life started as usual for him, but another shock came to him when he was diagnosed again with kidney cancer on his left kidney in 2019. 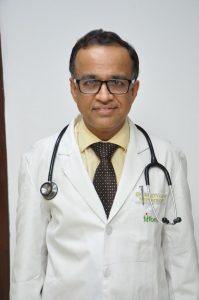 Dr Gulati explained his condition and said “Mr. Tambey has been a learning case for us. When I first saw him in 2011, I treated him like a regular kidney transplant patient. He was however a very disciplined patient having learnt a bitter Leeson about developing chronic kidney disease after neglecting management of his Diabetes state. He used to come for regular post-transplant check-ups, and this was the main reason we were able to pick up kidney cancer in its initial stages in 2015 and then again in 2019. This case has been a big challenge for me also his case was a challenge. Kidney cancer is very rare form of cancer and there is very less awareness about it. Mr. Tambey was following all the instructions that I gave him but still Kidney cancer struck him which was unusual. Kidney cancer comes silently and without visible symptoms like other cancer and confuses most people. When the final diagnosis was made, we decided that kidney transplant is the final option. He underwent removal of his kidney in 2017 and 2019 and since then has been creating awareness for kidney cancer among others. At our hospital we have done almost 1500 cases of kidney transplant out of which 5 patients have developed different forms of cancer the commonest being skin cancer Kidney cancer is a very unusual form of cancer after kidney transplant and this is the first of its kind in our country whereby it was diagnosed in its initial stages on both occasions and treated successfully  ”.

Renal cell carcinoma (RCR) or Kidney cancer is malignancy constituting 2-3% of all cancers hence the awareness is very low for it. Although the rate of kidney disease is very high in Indian population; RCR is a rare case occur in nephrectomy cases. Chronic kidney disease (CKD) affects 15-20 % of the India’s adult population and is one of the top 20 causes of death worldwide.

It is a disease which impacts not only the patients but their entire family with devastating economic consequences. Girls and women, who make up 48% of the Indian population and are important contributors to society and their families.

Women have unique risks for kidney diseases. Kidney diseases and issues related to access to care have a profound impact on both the current and next generations.
Kidney transplantation is also unequally spread, mostly due to social, cultural and psychological aspects.

In India the national figures show that 70 -80% of the patients are males whereas 70- 80% of the donors are females. Imagine the situation where the awareness about kidney cancer is low and how many lives are at risk.

Why Early Screening is important

Both Akash and Dr Gulati give emphasis on yearly screening of cancer for already kidney patients. Nobody should take any symptoms lightly. Kidney patients are already on immunosuppressant drugs which makes it very difficult for them to fight cancer.

The message from Mr. Tambey is “With bad lifestyle and no exercise, we are already destroying out anatomy. Not everyone is as lucky as me to have a good doctor, and many patients die due to lack of awareness. It is high time that we all should come together to raise awareness about the disease. I strongly recommend yearly checkup for all long-term patients for screening of diseases.”