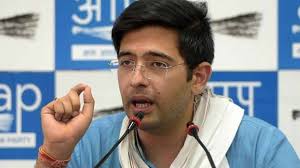 The 32-Year-old MLA requested everyone who came in direct contact with him to get tested if they noticed any symptoms, though he had no serious symptoms till now.

“My humble appeal to all who have come in direct contact with me in the last few days – if you notice any symptoms, please get yourself tested & take all necessary precautions. It is our responsibility to keep ourselves & others safe, preventing further spread of the virus,” Mr. Chadha tweeted.

I would like to inform you all that I have tested positive for COVID-19. No serious symptoms have surfaced yet but as a precautionary measure I am practicing self isolation for next few days.

There are several politicians who have come in contact with the virus that affected about 1.12 crore people in India.

Other ministers who had tested positive include:

According to the latest data released by the Union Health Ministry, India reported a daily jump of 22,854 coronavirus infections in 24 hours, the Health Ministry data this morning showed.

The country has a total of 1,12,85,561 infections, the second-highest in the world after the United States, but the daily tally has been slowly dropping since hitting a peak in September.

However, Maharashtra and Kerala continue to face the battle of spike in coronavirus cases.