New Delhi, November 18- In a sincere effort to instill among the public, a sense of commitment to engage, awareness to ensure sincerity, and prevention to learn to deal with the spectre of air pollution in the future, Healthwire Media Initiative organised a symposium,  Think.Breathe.Act, at Constitution Club of India, which was participated by environmental and health experts who discussed on the risk factors of air pollution, its harmful effect on the health of children, expecting mothers, working population and senior citizens and health advisory.

The event began by the illumination of diyas and welcoming the chief guests, panelists and speakers invited to speak on various relevant topics of health and effects of pollution spread over three interactive sessions.  The event was presided over by Dr. Rajesh Chawla, Senior Consultant in Respiratory Medicine, Critical Care and Sleep Medicine, Indraprastha Apollo Hospital.

The sessions were divided into issues pertaining to the health of children, women, working people and the elderly and how they put with the toxic blanket of pollution and smog over the city. 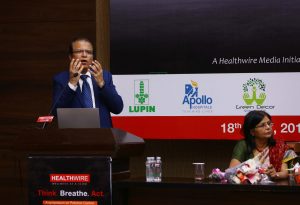 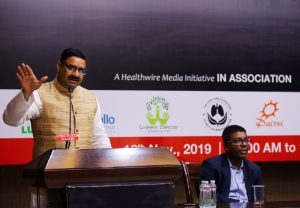 The esteemed panellists discussed how urban leaders could tackle air pollution through health-focused urban policies while making cities a bedrock for healthy living – as well as climate-friendly and resilient. And also focusing on the link of stubble burning and air pollution.