HealthWire
Home COVID 19 A Global Comparison Of COVID-19 Deaths: How Is India Doing In Counting... India has a history of under-reporting disease and death due to systemic deficiencies; Malaria and Tuberculosis are well known examples. It is often argued that a similar situation is highly likely for COVID-19 as well, given the fact that it is on the average a relatively mild infection, and many positive patients across India may be missed through misdiagnosis or missed diagnosis. During the initial weeks, some COVID-19 deaths may have also been missed by the system as routine pneumonia related deaths.

India has around 200 deaths as on 9 April 2020, but just about 6500 confirmed COVID-19 patients. Government’s data dissemination around Covid-19 leaves much to be desired, often muddled with delays and lack of transparency. For the same reasons, at times, wild speculations are made about the veracity of the figures that are being reported.

The Chief scientific adviser to the  UK Government, Sir Patrick Vallance, had suggested earlier that 1,000 cases per recorded death may be a reasonable way of estimating the true scale of the infection. According to the above mentioned, rule of thumb, there should have been around 200,000 cases across the country at this point. Given this context, there is a need to look at international experiences during the initial phases of the COVID-19 pandemic, and see whether India is indeed doing worse than other countries, on the average. 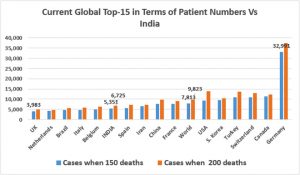 When we look at the current top 15 countries in terms of patient load and examine historical data, it becomes clear that while India has had lower than expected number of recorded patients when it crossed 150 COVID-19 deaths, it is by no means an outlier. India indeed had a lower number of patients (5351) as it crossed 150 deaths than the global average, but countries like UK, Netherlands, Brazil, Italy, and Belgium, had an even lower levels of recorded number of patients at that time. When the current top 15 countries in terms of mortality load is examined, overall, the same countries remain in the list – although South Korea is replaced by Sweden. Sweden had recorded 4239 patients as it crossed 150 deaths, as against India’s 5351. 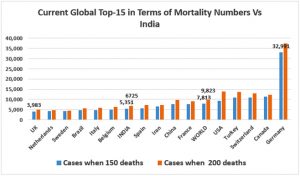 Interestingly, three countries that have tested aggressively have yet to have 150 deaths, namely Russia, UAE and Australia. While Germany is clearly an outlier, with around 33000 patients when it had 150 deaths due to aggressive testing–also partly explained by the relatively younger population that got affected initially–most other countries have had higher but somewhat comparable numbers as that of India. The reasons behind this may differ from country to country and need to be studied further. However, it is interesting that global hotspots like UK, Italy and Belgium have had lesser number of cases than India when they crossed 150 as well as 200 deaths during the initial phase of the pandemic, perhaps explained by the older populations with a higher NCD burden. Even South Korea, a global example of aggressive testing had around 9500 recorded patients of COVID-19 as it crossed 150 deaths, surprisingly close to India’s 5351 patients.

It is often assumed that number of deaths is a better indicator than the number of positive patients, because it is harder to miss deaths than disease. It needs to be kept in mind that unlike many other countries (almost exclusively high-income countries) on the list, in India, both patients as well as deaths may be under-reported. In many rural parts of the country, we have not even started testing yet, and a true picture will emerge only slowly, given the acceleration in testing that we see now. 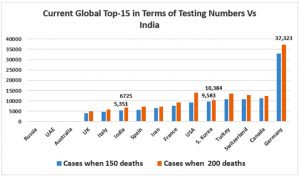 However, this analysis shows that the widely held perception that India is doing particularly badly in terms of identifying patients and counting the dead may be misplaced, looking at the available international data. India’s COVID-19 mortality as well as morbidity load at this point suggests that on the average, it is not much different from what we saw initially in the current global hotspots, mostly developed countries; considerably richer, with well-equipped healthcare infrastructure and very sensitive surveillance systems in place.  At the same time, India needs to make sure testing is equitably and urgently expanded, and explore ideas like pooled testing so that we identify hotspots during the lockdown across the country, and make an informed decision about which areas can see a cautious easing of restrictions.

We have just completed 100 days since the world was notified of this major threat. It is very contagious like flu, and more fatal. As we move forward, counting of cases per se will become less and less important with the focus shifting to assigning resources towards saving lives at hospitals. However, while India is still in lockdown, testing is as important in saving lives as ventilators are, as slowing down the pandemic is perhaps India’s only chance given the weak hospital system. Lockdown is the time when we should identify all the pockets where the virus is circulating, and proceed accordingly. We need to know the scale of the spread before we decide where we extend the lockdown and where we lift it.